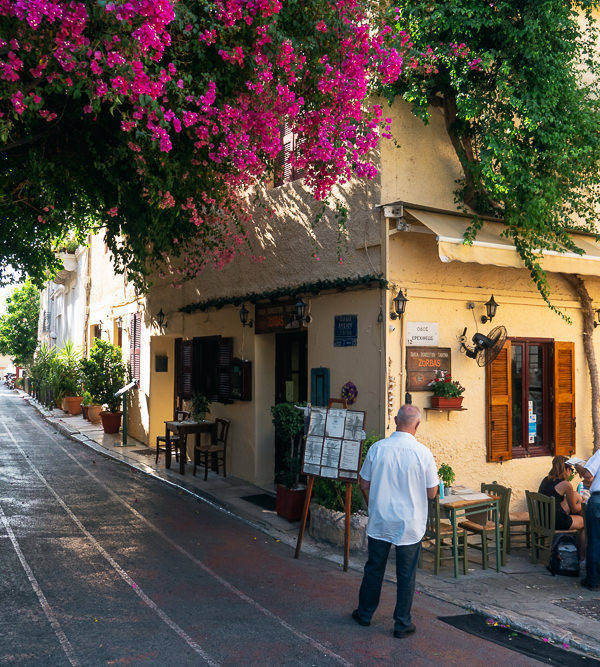 When researching Athens online, you’ll no doubt find a few bloggers saying it’s ‘not their favorite’ or ‘not what they expected’. What gives?

It’s easy to see why Athens can elicit so many strong opinions. I happen to love Athens — and I think it’s worth staying at least 2 or 3 days in Athens. But I must admit, I liked the city much more the second time around, without all the baggage of sky-high expectations.

If you know what to expect of Athens, you can let yourself be whelmed by what makes it unique — and enjoy it twice as much.

When you think of Athens you surely think of Ancient Greece.

You think of it being the Birthplace of Democracy.

And you’ll no doubt imagine scenes of classical splendor and, I don’t know, maybe people in white tunics being fed grapes.

That is not what contemporary Athens is.

I first visited Athens back in 2011, when Greece was still in the throes of its financial crisis. Instead of some glorious ancient city, I was surprised to find a sprawling concrete jungle covered in graffiti. Athens almost felt like one big suburb, dominated by monotone mid-rise buildings constructed mostly in the 1960s and 70s. Its historical center was but a small island in a sea of sprawl.

What made Athens feel drearier at the time were the protests in the squares and many homeless people in the streets. The Greek financial crisis wasn’t just some abstract balance-sheet thing; you could really see its effects in the city.

My visit back then was admittedly short as I quickly headed to the Cyclades Islands, but ever since the city was stamped in my mind as ‘not nice’.

Maybe the city had changed over the past ten years… I imagine it has. But I think my own perceptions were simply also different this time.

Why Athens is actually great

When it comes to Athens, first impressions aren’t everything. If you’re not charmed when arriving from the airport right away, try to give it some time. At least, I can say that Athens really grew on me after a short while.

Despite being a large modern city, Athens does have a wonderful (albeit small) historical core. As a tourist you’re likely to stay in or near the area of Plaka. This area is simply delightful, thanks to its friendly cafes and tavernas, cobbled steps, and shaded squares. Hugging the slopes of the Acropolis and largely free of motorized traffic, it has an almost Greek-island vibe. 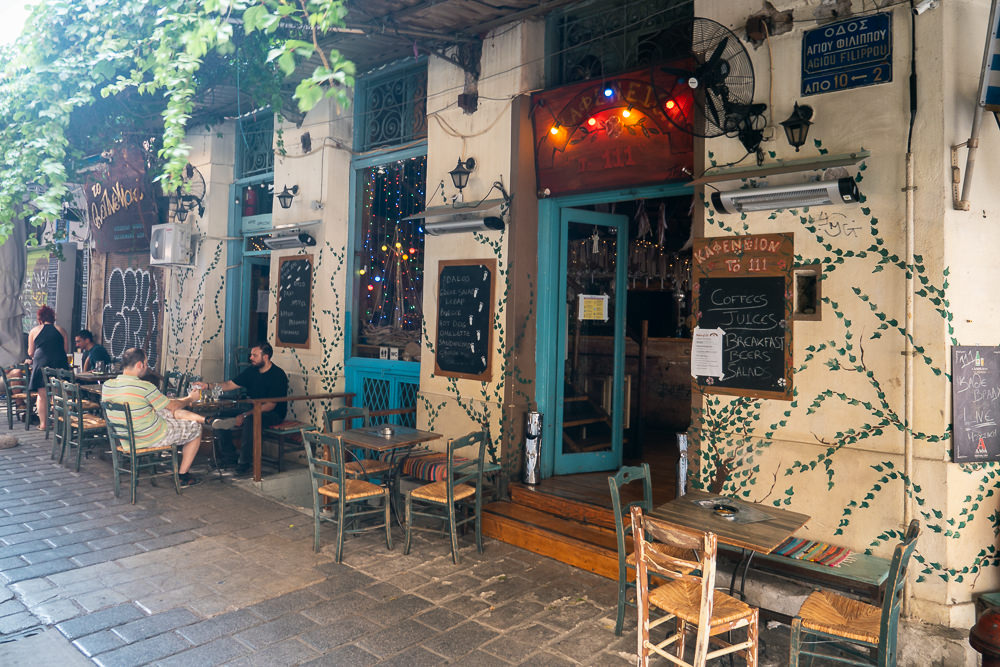 Not to mention, the sunset views from the city’s hilltops are incredible. Behold Athens from this zoomed-out perspective and you will see it in a whole different (glowing orange) light.

The star attraction of Athens is, of course, the ancient Acropolis. This must-visit site does not disappoint. I do recommend getting an audio tour or a tour with a knowledgeable guide to get the most out of it, as this will make the ancient ruins truly come alive. Athens’ spectacular history museums will of course transport you to that classical era you’ve heard so much about. If you’re a history buff, you’ll love it for sure. 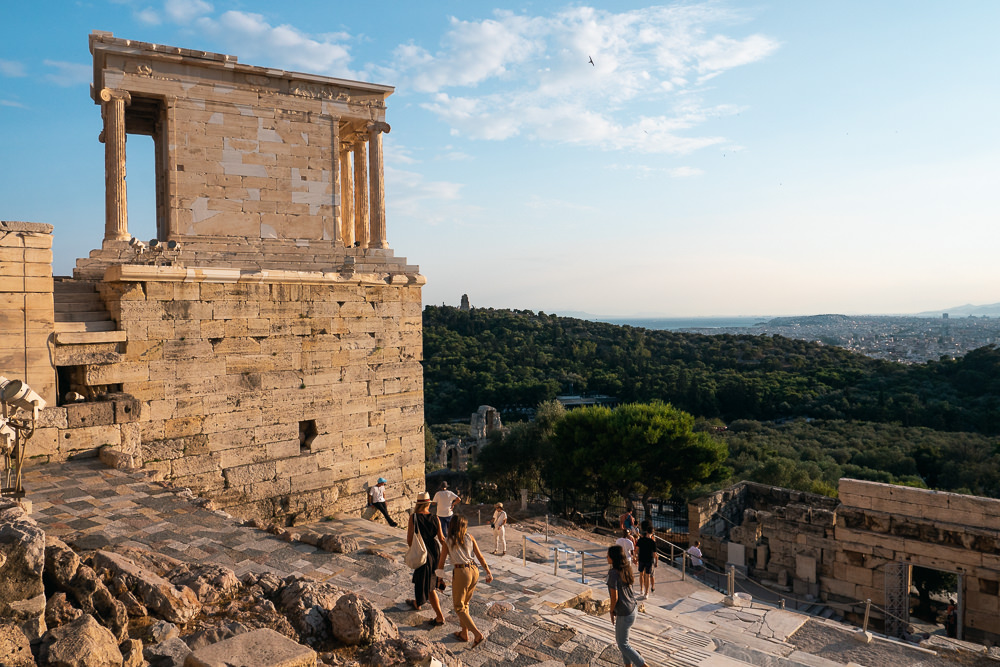 Beyond the touristy center, you can also appreciate Athens from a broader curiosity. The city is clearly quite poor and surely went through a lot — and it’s still dealing with the arrival of many refugees. Yet the word is also getting out about its flourishing art community, reminding some people of the early pre-gentrified days of Berlin. (Although not every local is fond of this comparison.)

Oh, and all that graffiti? Well, there’ll just be lot of it, no matter if you’re in a bad neighborhood or good. More interesting than the tags is some of the amazing street art you can find livening up the walls of some of the derelict buildings. It makes random exploration a little more rewarding. 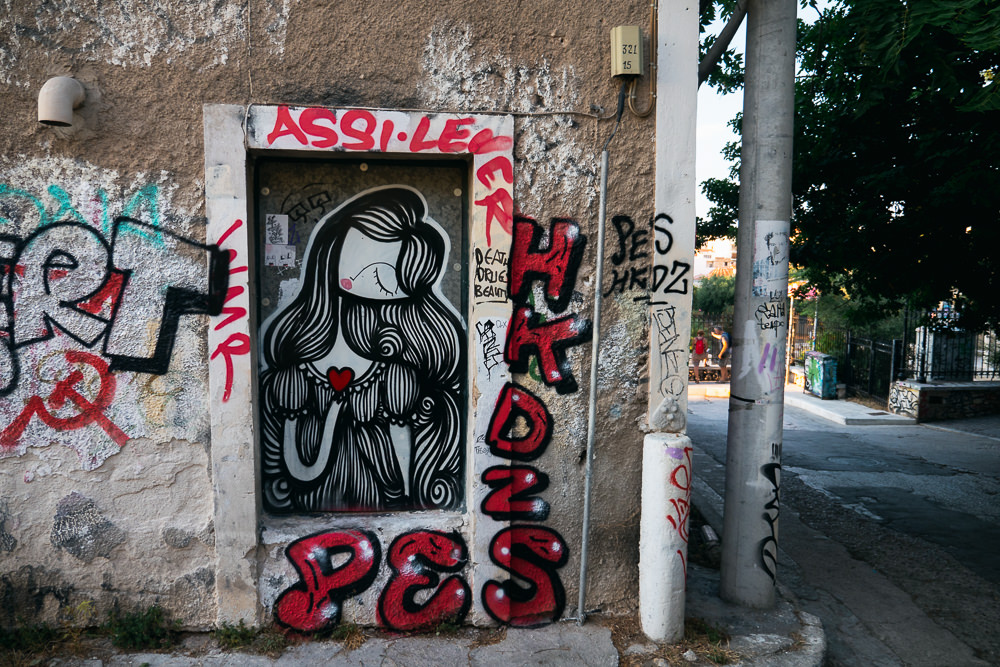 Just think of Athens as a city of contrasts. If you head just a few blocks north from peachy Plaka, don’t be too alarmed to see some riot police on their cigarette break. The area of Exarcheia, near the National Archaeological Museum, is a bit of an anarchist bulwark — in fact, it has been so since long before the financial crisis. That’s why there are always some police on duty around it.

This is also what makes Athens interesting, even if you do stick to the tourist-friendly and more photogenic areas. With a bit of time, you’ll see Athens has a warmth and character that may be easy to miss at first. 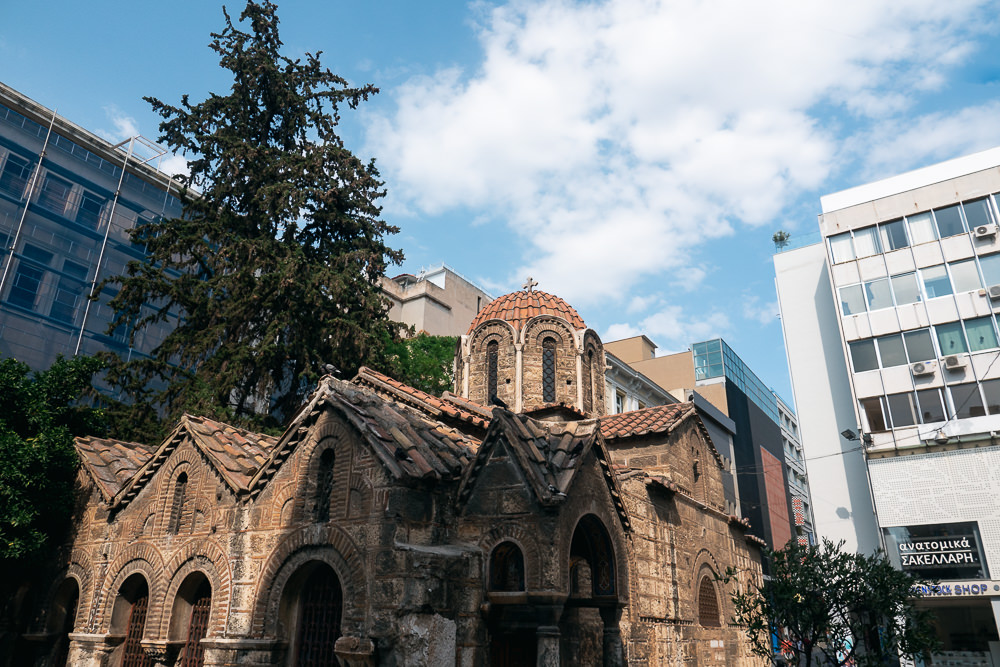 Getting the most out of Athens

Unlike some other European capitals, Athens doesn’t have quite an endless list of things to see or do. But I think you do need at least a couple of days to see the highlights or 3+ days at a more relaxed pace (see this 2-day Athens itinerary).

A few tips for Athens:

1. Stay in Plaka, Monastiraki, or Koukaki

Sure, these areas are highly tourist-oriented, but they are also really nice. Staying there is worth it: at first, I tried saving money by booking a budget hotel further into the city, but this was not so convenient and actually cost more money to get to- and from. I later stayed in an apartment in Plaka and it was wonderful to be based right beneath the Acropolis.

July and August get very busy (and hot!) so it’s nicer to be in Athens before or after these months. With fewer crowds, it’s easier to explore and enjoy the atmosphere.

Know that it can be searingly hot sometimes in summer, with an average high-temperature of 33.7°C (92.7°F). In July or August, consider doing most of your outdoor activities in the morning or late afternoon. Around midday, hit up some of the air-conditioned museums to stay cool.

4. Dive into the history

Athens is a lot more fascinating when you know more about its history. Before my trip, I read Creators, Conquerors, and Citizens: A History of Ancient Greece, which is an accessible but in-depth book on ancient Greek history. It helped me appreciate the museums and the Parthenon that much more.

5. Use apps to hail rides

Be sure to use Uber or the local version called Beat to hail rides. Only licensed taxis are allowed in Greece, but these apps ensure you won’t be overcharged for any journeys. The moment I stopped using Beat, the drivers began to charge twice as much!

Even though Athens might not match the glorified images we may have of it, if you give the city a chance, you might just end up being one of the highlights of your trip in Greece.

Some links (such as to booking sites) may be affiliate links, meaning I may earn commission from products or services I recommend. You can read about my site policies.