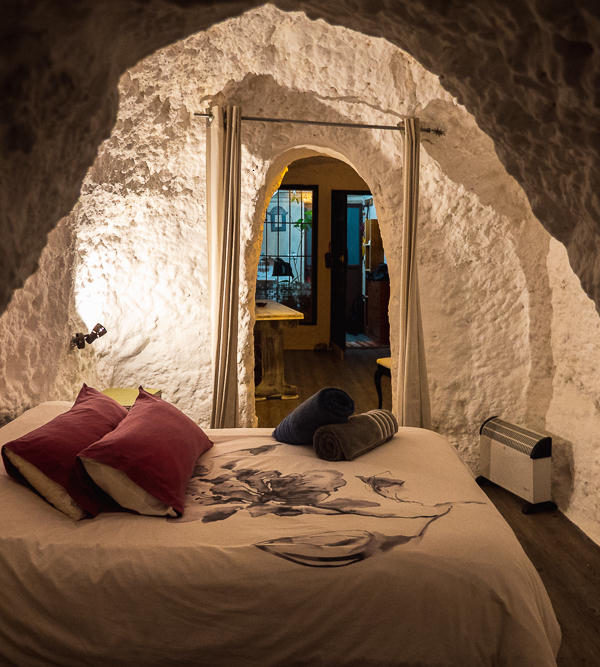 In this guide, I’ll share the best neighborhoods for Airbnbs in Granada, explain the differences between the barrios, and give you my suggestions for the best apartments. I’ll also tell you about the unique cave house Airbnb I stayed in!

Planning a trip to Granada? Great choice! It’s truly one of Spain’s most romantic cities, best known for the UNESCO World Heritage site of the Alhambra. It’s part fortress and part palace, built in the Middle Ages by the Moors who ruled over southern Spain — and you can see it looming from its hilltop position from many areas in Granada.

Not only that, but Granada is famed for its tapas, being one of the few places in Spain where you can still get these small bites for free when you order drinks in most tapas bars.

Granada is also one of the best places to experience the Flamenco dance — more specifically the Zambra, a local variation that’s particularly intense.

Granada has several great areas to stay, which I’ll highlight here along with my top picks for Airbnb apartments in Granada. 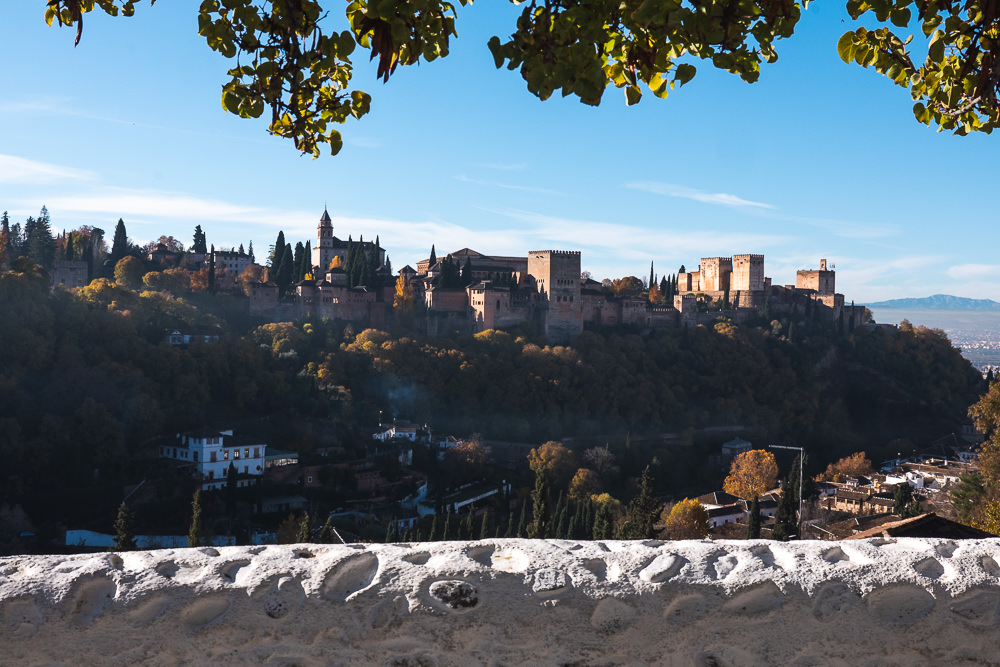 Sacromonte has traditionally been the neighborhood of the Granadian Romani, who first settled there during the Middle Ages. The area is typified by its many whitewashed cave houses built into the hillside.

Although it’s not necessarily luxurious, this area is super charming with barely any traffic and lots of small donkey paths leading up to the houses. Expect to have to climb the hills a bit with your luggage in order to reach your Airbnb.

I recommend Sacromonte if you enjoy a bit of hippie charm (and don’t mind some poorer neighbors much further uphill), though if you like something more upscale you may want to look for Airbnbs in the Albaicín. 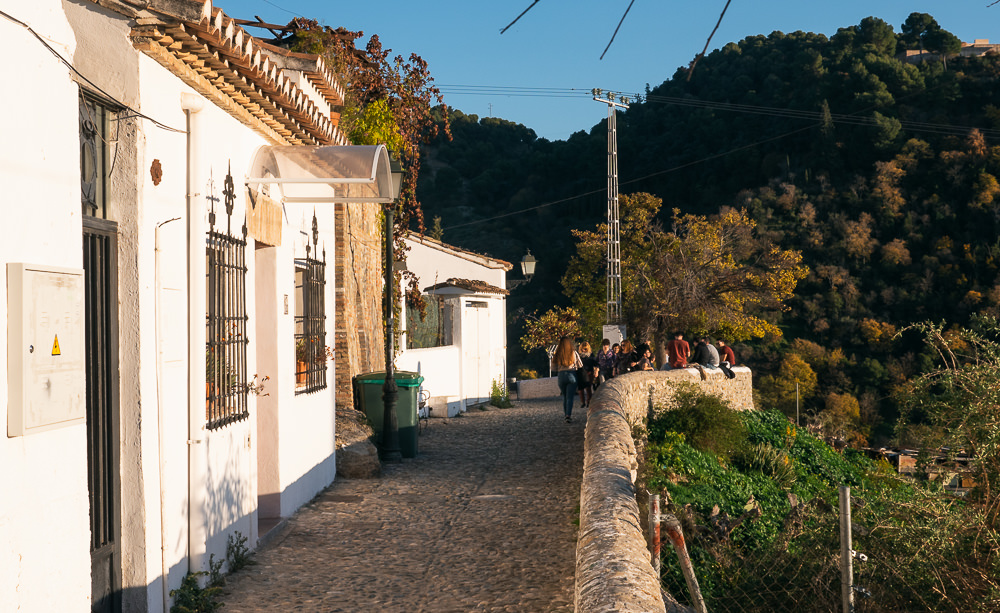 While Sacromonte is just slightly further outside of the city core, I do recommend staying here for its spectacular views of the Alhambra, not to mention the chance to stay in a cave house.

What really made my stay in Sacromonte very special was staying in a cave house, which is truly a unique kind of accommodation, and a lot comfier than you might expect from a ‘cave’! The air inside was great, the acoustics and lack of outside noise made me feel very relaxed, and I slept like a baby.

The cave house I stayed (shown below) was amazing! You can view this cave house on Airbnb here. It was spacious, comfy, and the landlady was very friendly and gave us a lot of great tips. It also has a terrace overlooking the Alhambra palace. I thought it was a unique experience that made me even more excited to be in Granada. 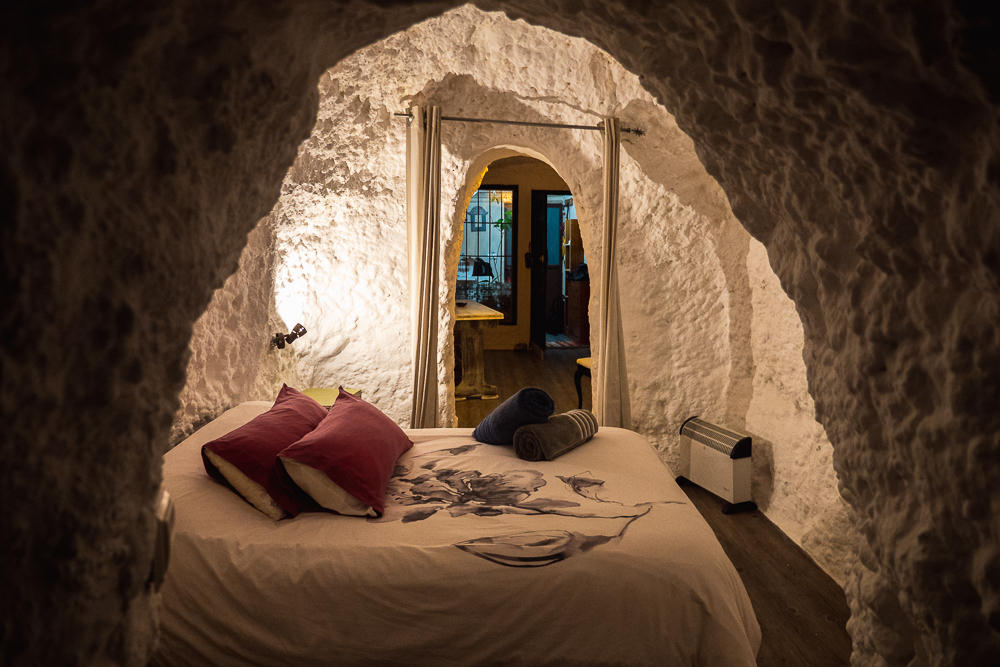 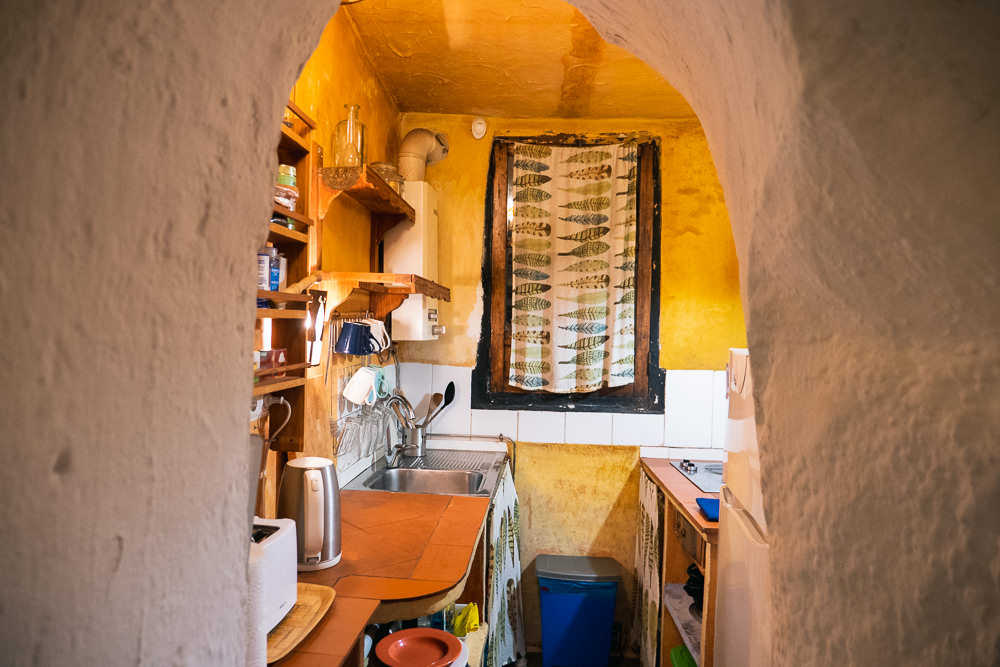 Sacromonte is where the Zambra dance is from and you’ll be able to see it performed inside several cave bars that line the main road. A bit further up the hill, you can find many charming cave Airbnbs, while the top of the hill is mostly the domain of artists and free spirits who built their off-the-grid cave houses there unofficially. 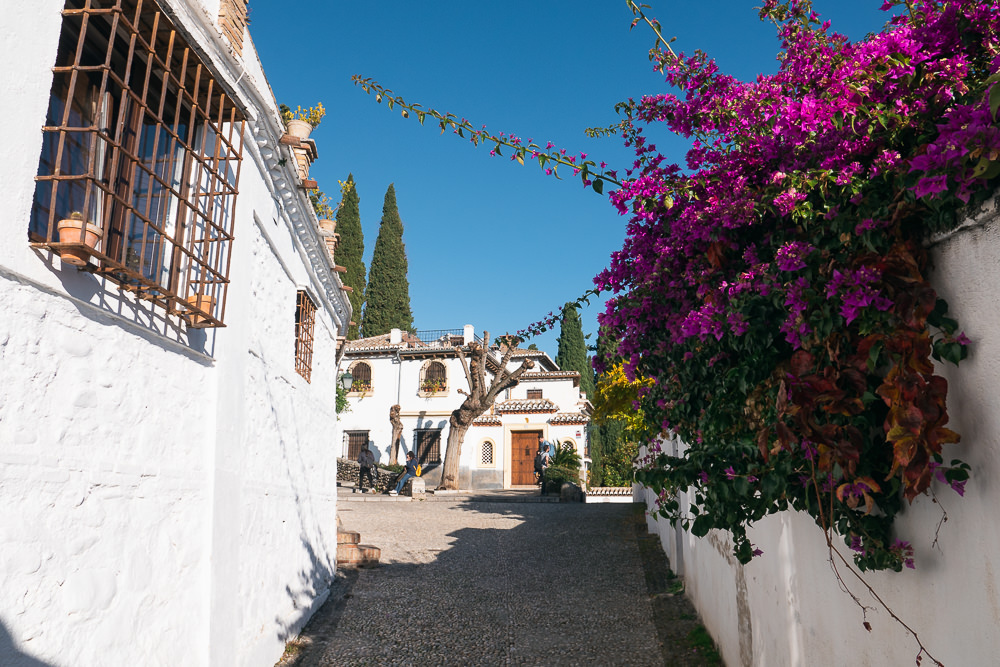 The Albaicín feels a bit like its own village within Granada. It was known as the Moorish quarter during Medieval times and is typified by narrow winding streets and white plastered buildings. It’s one of the most authentic areas of Granada while putting your right at the heart of the tourist center.

The area is bordered by the Darro river and is watched over by the Alhambra, which can be seen from many miradors (viewing points) up the hill. This old Arabic quarter features many examples of Moorish architecture, with some of the ancient trade houses along the river having been converted into boutique accommodation. 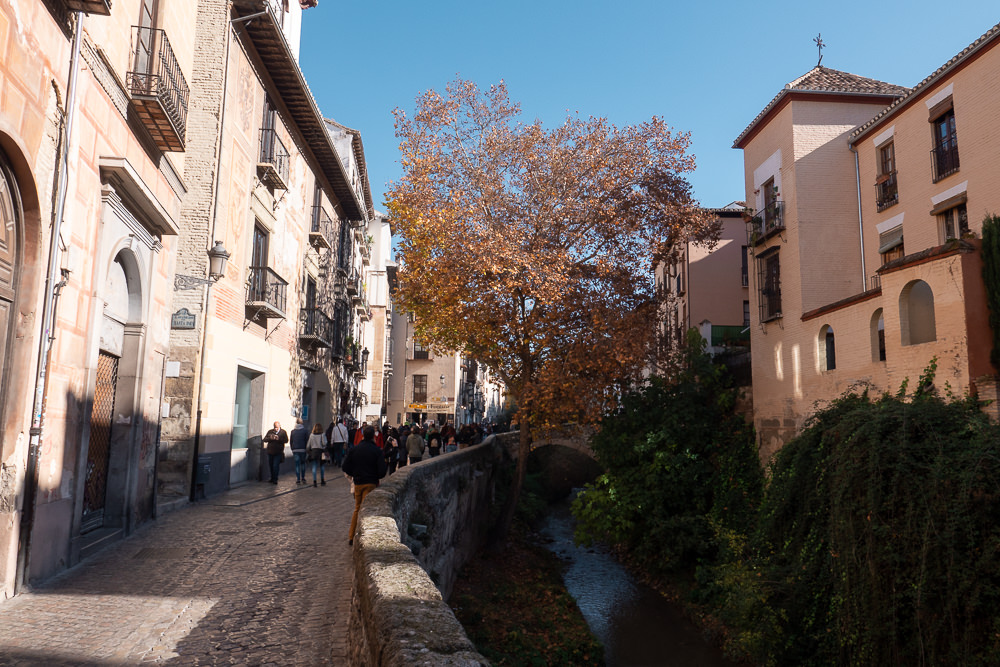 I think the Albaicín is an ideal area to stay for most visitors to Granada. You’re close to all the key sights and a stone’s throw from the Alhambra. Be sure to do a guided walking tour through the Albaicín, as it will bring to life this area in a way that’s difficult to capture just by yourself!

Tip: if you’re not having breakfast at your Airbnb, I recommend getting the breakfast at Durán Barista. You’ll get all the breakfast items you want, plus specialty coffee including an amazing Etheopean brew, and some soothing classical music to boot. At night, don’t miss this fun wine cellar bar. 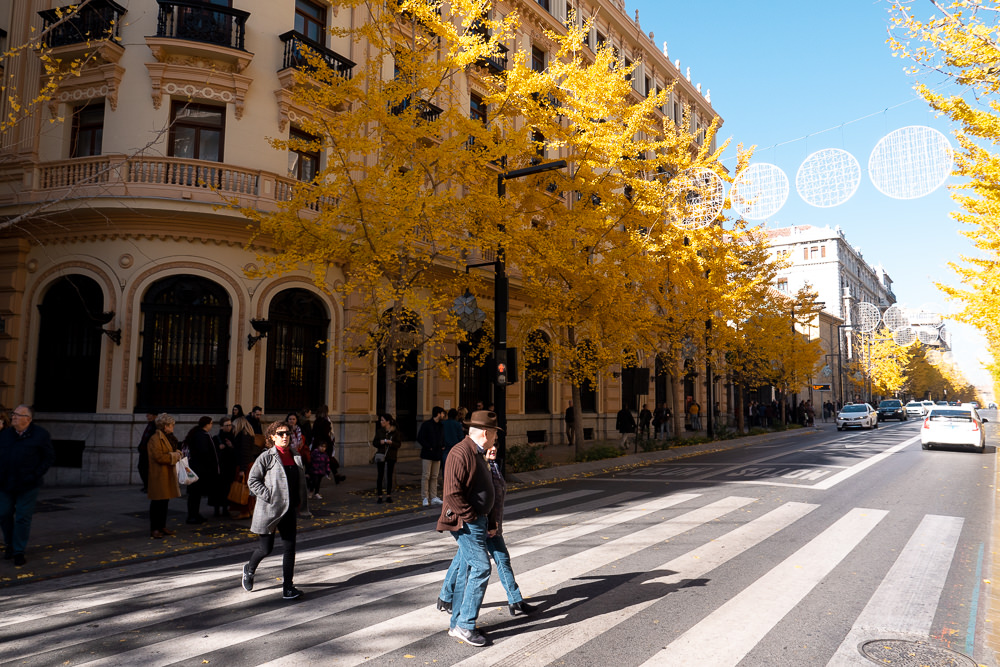 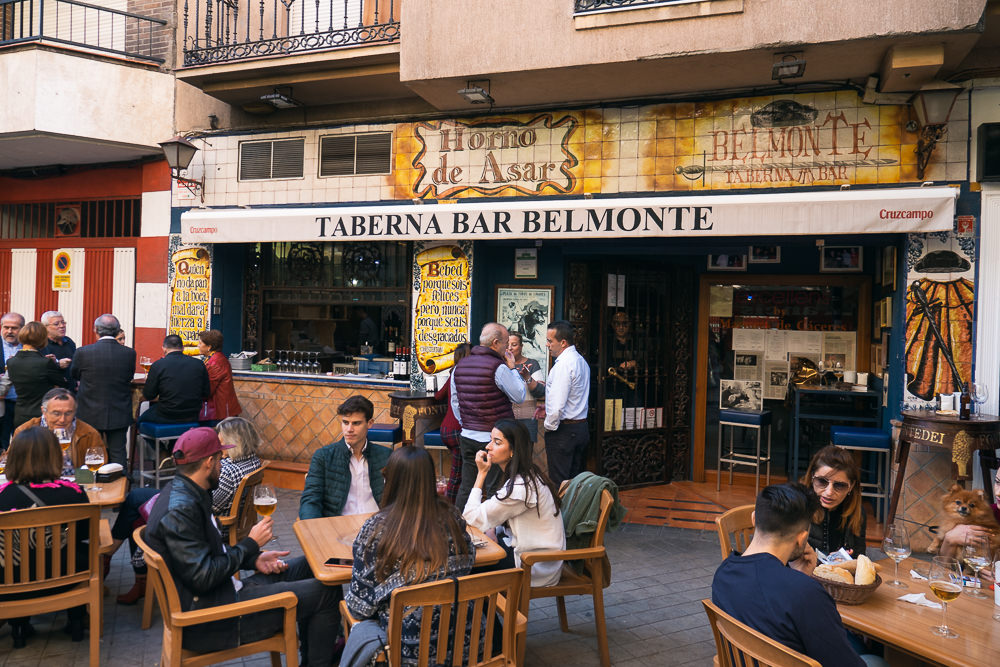 Downtown Granada is typified by wider streets and a mix of retail and residential buildings. Although it doesn’t have the cute windy streets of the Albaicín or Sacramento, many still consider it the best area of Granada to stay in for easy accessibility and convenience.

Walking from Centro to the Alhambra will take about 30 minutes. It’s a good area to look for deals on Airbnb, as the prices of apartments are a bit lower than in the Albaicin, all the while being in an ideal location to enjoy all the best Granada has to offer.

Some links may be affiliate links, meaning I may earn commission from products or services I recommend. You can read about my site policies.